Last spring I was contacted by an individual claiming to represent the producers of a new food show which would be airing on the INSP network. They wanted to know if I’d be interested in making clam chowder for one of their segments. After Googling INSP to make sure it actually existed and was not being drawn into an elaborate prank, I responded and requested more information. They told me that the show was to be called State Plate, the gimmick being that every episode would feature one of the 50 states and highlight the dishes that best represent it. The host was to be some guy named Taylor Hicks, who I was later told won American Idol despite being way too old. They were not daunted when I informed them that my chowder had never placed higher than second in the premiere local chowder showcase, the Tuckernuck Chowder Battle, nor were they alarmed when I ranted for the better part of an hour about the elaborate and very real conspiracy which year after year deprived me of my rightful crown. They also mentioned that I would be paid $400 to appear on camera making chowder. Naturally I agreed. The following video is a clip of what resulted.

Thanks to INSP, Taylor Hicks (who turned out to be a good guy), the whole State Plate team and to Jonny A for editing out my segment.

PS: The quahog is NOT a soft shell clam.

Heavy penalties assessed to all non-Yohos who tie up here!

We haven’t mentioned his barbecue… 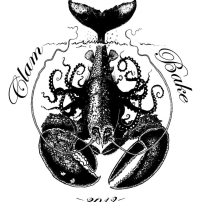 2012: The year of the H.P. Lovecraft Frankenlobster

He shucks in a tux 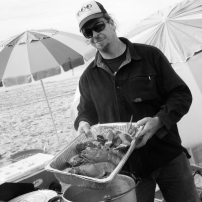 Who can resist a pan of steamed native lobsters, especially when served on Tuckernuck? 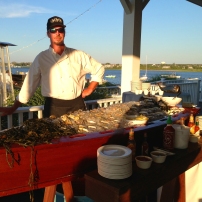 The Yoho as King

The Raw Bar Yoho with his daughter

Kids love the Yoho too!

Old and new pit methods, side by side